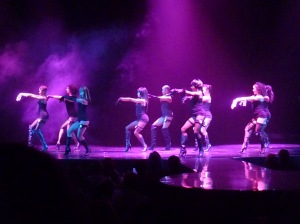 “Broadway Bares” is a fundraiser show created by Jerry Mitchell in 1992 in New York City.  It benefits Broadway Cares/Equity Fights AIDS.  The event challenges members of the performing community to “strip for a cause”, daring performers to creatively strip down to pasties and g-strings to help raise donations toward the charitable groups.   This event has raised $6.6 million in New York City, and debuted in Las Vegas just last year.

“Las Vegas Broadway Bares” is an example of the eclectic cultural events for which professional Las Vegas entertainers create new works.  Typical of these events, it is a one-show event and occurs late-night after the close of the long-running shows, which allows cast and crew from major production shows in Las Vegas to participate after their regular shifts.  Tickets cost a mere $20, a bargain to see such talent all in one place.

Last year, performers were given just 3 weeks to put together seductive numbers.  Highlights of that show included a striptease solo on a cello, a reverse striptease by a Chippendales dancer and handstand acrobatics from Le Reve.

This second annual edition was a bit different in that the participants had months to prepare, only group numbers were allowed and each number had to incorporate the theme of the night, “2 Hot”.

Since the core idea of “Broadway Bares” is complete de-robing, every number involved lingerie (whether lace or leather) and the removal of it in some way. For experienced Las Vegans, near-nudity is commonplace and no longer shocking. What makes a show like this interesting to Vegas veterans is the style of dance, the approach to the striptease, and the innovative concepts of the choreographers.

Case in point was “Simply Barerisistible”, featuring lingerie-clad girls body-spinning on barstools in different poses; it was intriguing and sensual. Could this be the next sensation to follow pole dancing from the strip clubs to the health clubs?

Three numbers stood out because of choreography and performance value.  “Hit Me With a Hot Note” featured sharp dancing, lots of great partnering, and exhausting-to-watch choreography.  “Nice N’ Slow”, choreographed by Saleemah Knight, was a grooving, gratifying hip-hop number with excellent live vocals by Jelani Remy.  “Bringing the Heat”, choreographed by Erin Barnett, was a heart-pounding, burlesque/dance club fusion featuring simple, lusty moves that built to a fevered climax.

Alberto del Campo and David Underwood of Le Reve did a terrific spoof on the now ubiquitous male-on-male hand-to-hand duos, highlighting the homoerotic positions often used by these acrobatic acts.  Del Campo and Underwood, to their credit, included many authentic moves that required genuine strength and balance, all the while deadpanning and playing it intensely straight, which just added to the hilarity.

Acting as host was Edie, the cross-dressing host of Cirque du Soleil’s  Zumanity.   Impeccably attired,  and keeping up a clever stream of banter, Edie gave a fetish, after-hours feel to the show.

A few numbers were a bit difficult to watch, either because the performers were not in “stripping shape”, or because they were awkward on stage.  “Le Jazz Hot” and “Hot Clowns” fit that category.  “Looks That Kill”, while fierce because of the powerful heavy metal music, suffered slightly from the use of toy-sized hatchets –  props that were brandished but never used for anything meaningful in the number.

Audience reaction was very loud and supportive of every number.  It was clear that everyone enjoyed the show immensely.

Events such as these serve a dual purpose: participants have a chance to express their own style and message, and donations are raised for a charitable organization.  But the third beneficiary is the audience, who has the singular opportunity to witness this outpouring of talent and passion.   There is no better way to appreciate the enormous amount of talent in Las Vegas than to attend special events like this.

Huge kudos go to all the performers and crew of “Broadway Bares” who fit in extra rehearsals for this event before and after their full-time gigs in various production shows, including Zumanity, Jubilee!, Le Reve, Disney’s The Lion King, Naked Boys Singing, Vegas The Show, Peepshow, Jersey Boys, The Viper Vixens, 12:30 Clown Show, Bite and Donny and Marie. Even former cast members from Les Folies Bergere returned to the stage for this event.

For a more PG-rated version of this kind of special event put on by the performing community, don’t miss Golden Rainbow’s “Ribbon of Life”, held every June.  This event runs for two days and is a matinee show in a casino showroom.  It benefits Golden Rainbow’s mission to help Nevadans with AIDS.  “Ribbon of Life” has been an annual show for over 25 years, and always features top-notch dance and song from the best performers on the Las Vegas Strip.

Entering the Absinthe world from the casino at Caesar’s Palace, one is transported to a 19th century carnival/tavern type atmosphere.  Antique artifacts from the late 1800’s decorate the walls, the color palette is natural woods and rusting metals, and the lighting is low.  The liquid inspiration of the show’s title is offered immediately to all show-goers, giving the first indication that this is not a typical circus performance.

The second indication occurs when upon entry to the tent, rather meaty characters are seen sitting in trapezes eight feet overhead.  They neither swing nor do acrobatics; rather, they just decorate the equipment with their bohemian presence.

The third, and definitive, sign that this is not going to resemble the circus mega-productions that Las Vegas has become accustomed to, is the greeting from the MC of the show, “If you aren’t comfortable with [certain four-letter expletives], you’re at the wrong [expletive] show!”  Indeed, it was a honest warning of the bawdy raunchiness of the show to come.

Individual acts in the show include burlesque, hand balancing, banquine (team aerial acrobats), trick roller skating, trapeze, high wire, silks with chains, and spoofs of other circus’ exotic  aerialists.  The guest performers were highly skilled and did incredible feats on such a small stage.  The audience bravely remained seated despite the risky acrobatic acts happening almost in their laps.  The acrobats perform at a world-class level, clearly on-par with those at the bigger permanent circus show down the street.  This is the most up-close circus experience one may ever have, and it is truly breathtaking!

Absinthe is a ‘circus of the grotesque’; a rough-edged, potty-mouthed, intimate version of the circus mega-spectaculars that have taken over Las Vegas.  It reveals to us the gritty, bizarre, acrobatic performance art that exists in the dark corners of society’s underbelly.  And it’s not to be missed. 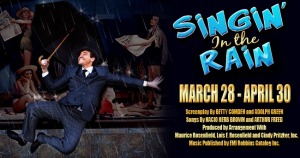 One of America’s most beloved movie musicals was brought to life this month in Las Vegas, complete with real rain, great singing and mostly great dancing.

The rain effect, using real water, surely was a difficult technical task to design and run.  With the help of UNLV’s Engineering Department students, this production successfully made it rain on cue and with no drainage problems.  It added a wonderful dimension to the live production.  Although the rain itself was spotty and uneven, it was amazing to see it at all on this small library stage in the middle of a desert.  Stage crew and engineering students alike deserve a lot of credit for making it possible.

The principal actors were engaging and committed.  Evan Litt, as Don Lockwood, brought to life the lead character with style and ease.    David McMullin, as Cosmo Brown, was energetic and a very decent tapper.  Shannon Winkel , as Kathy Seldon, had an angelic voice that was a treat to hear.  Kelly Albright, as Lina Lamont, was spot-on, line for line –  a complete resurrection of the original film’s character, in vocal effect, mannerism, and acting.

Some things in movies cannot be reproduced on stage.  Gene Kelly purposefully experimented with the unique ability of film to capture close-ups, stunts or visual angles that cannot be done live.  This show cleverly re-staged some of the movie scenes so the story line worked successfully onstage.  One example was Don Lockwood’s getaway from his screaming fans, which in the movie involved Don climbing on top of a bus and jumping into Kathy Seldon’s car.  In this stage production, Don escaped on foot and bumped into Kathy at a bus stop.  It worked perfectly.  Also, in the set-up scene before “Broadway Melody”, McMullin alone tries to explain the concept of the singing and dancing part of their “talkie” movie to studio owner, RF Simpson, which allowed Litt to participate in the “Broadway Melody “dance sequences (in the film, both Don and Cosmo are in the owner’s office, as well as Don being the main character in the dance sequence).

McMullin was impressive as Cosmo, especially in the physically demanding “Make ‘Em Laugh” scene, where he sang, launched himself around the set doing physical comedy, and even threw a little contortion into the mix.  His acting was marred only by his habit of emphasizing one-liners with a facial grin so pulled back it almost seemed like a grimace.  But his energy and projection was, like the rest of the cast’s, fantastic.

Choreography by Teresa Martinez stayed true to the style of Gene Kelly’s original choreography, for the most part.  The original spirit of numbers like “Moses Supposes” and “Good Mornin’!” was preserved very well.   However, there were lost opportunities in the “Broadway Melody” montage number though, when short stops in the music, which were obviously supposed to be used for tap breaks (tap solos) were choreographed as dance freezes.   Another problem, perhaps only noticeable to trained dancers in the audience, was the technique of the ensemble dancers, which lacked leg and foot lines and walking style.

The use of home-made films to re-enact the vocal-dubbing scenes in the original movie effectively reproduced a very interesting and core aspect of the original film.

Huge credit must be given to all the leads for doing what neither Gene Kelly nor any film musical actor ever had to do – sing while they did that Gene Kelly choreography.  That is truly difficult, and a remarkable feat – a testament to many, many hours of rehearsal.

The finale was the most visually-satisfying scene, with the ensemble and leads all in yellow rain slickers and dancing in the rain – a very pleasing end to the show.  Signature Productions gave community theatre a professional sheen.

The performing arts scene in Las Vegas will surprise and please you.  This blog highlights and reviews the dance and music concert scene in this desert town, the Entertainment Capital of the World.